Thermoformers working non-servo-eject trim presses could have entry to a first-of-its form automation answer due to new expertise launched not too long ago by BMG. Its Mantis Robotic Trim Press Handler was developed by NAS Nalle Automation Techniques, a BMG firm, and is billed because the business’s first robotic system that reliably handles the move of elements ejected from any non-servo trim press, together with these made by BMG rivals. The totally automated system reportedly can scale back labor necessities by as much as 75%, and the modular robotic design permits for device changeovers in below an hour. Mantis has been working since March at an undisclosed Midwest thermoformer on a line making PP lids.

Earlier than this innovation, elements ejected from non-servo trim presses needed to be manually separated and counted, a labor-intensive, error-prone and inconsistent course of that limits the automation of downstream packaging capabilities. NAS solved this drawback with its patent-pending Trim Press Receiver (TPR), which makes use of a novel separating mechanism to depend and include stacks of product, adopted by a raking mechanism to take the product into the receiver for switch by the robotic.

Kurt Huelsman, president of NAS, calls the TPR the “core of the road.” As he explains, “Having the ability to lower into the ‘deck of playing cards’ of a number of lanes of product, separate them, after which include them as they’re pulled off the trim press whereas it’s nonetheless working doesn’t sound laborious. However nobody has ever completed it successfully earlier than. Mantis can deal with merchandise which have been relegated to non-servo eject as a result of they’re laborious to deal with, comparable to lids, which don’t nest effectively. With out the TPR, we have now a pleasant robotic handler. With it, we have now a non-servo-eject system that may deal with merchandise beforehand unable to be automated. The way forward for thermoforming is for automation to be in-built, not merely an choice or accent.”

“The way forward for thermoforming is for automation to be in-built, not merely an choice or accent.”

He provides, “Constant and dependable separation of product on a constantly flowing, non-servo-eject trim press was the important thing to the event of Mantis. The design of the receiver, coupled with NAS’s robotic automation capabilities, brings a protected, productive and cost-effective answer to a traditionally very guide course of.”

The way it Works

As Jon Smalling, director of automation for NAS, explains, the TPR is butted up towards the trim press. Raking and separating mechanisms throughout the TPR accumulate elements, that are offered to a six-axis robotic geared up with product-matching, quick-change end-of-arm tooling (EOAT). The robotic routinely transfers product to a Shuttle Station, which, after kicking out mis-trim or off-spec elements, integrates with downstream packaging capabilities that embody wrapping, boxing, case packing, sealing and palletizing. Incorporating the robotic permits the Mantis system to be very compact and configurable, making set up attainable the place flooring house is restricted or obstructed, BMG says.

Right here, the Mantis robotic transfers lids from the TPR to the shuttle.

BMG payments Mantis as configurable and adaptable. Explains Huelsman, “To begin with, we are able to work with non-servo eject and servo trim presses from any provider; the TPR interface designed for a BMG trim press could be completely different than for different manufacturers. So there shall be options to the TPR that shall be distinctive to the actual trim press when it comes to fixturing, attachments, and so on. Provides Smalling, “The TPR takes up about the identical house as operator interplay, if not much less. Keep in mind, a typical thermoforming plant has to allot house for 3 to 5 people for pulling, separating and counting stacks of product. Our robotic and shuttle station are fully reconfigurable. We’ve designed a system that may ‘dance round’ any current footprint.”

Introduction of Mantis comes at a time when processors of every kind are searching for automation options to enhance efficiencies and mitigate ongoing employee shortages. Notes Bob Gordert, BMG’s v.p. gross sales for the Americas. “On the post-trim aspect, a really giant share of our clients are requiring downstream automation to justify new thermoforming gear with the intention to obtain their ROI and to mitigate publicity to workforce shortages.” 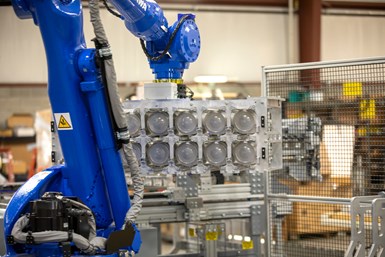 Shut-up of Mantis robotic with quick-change toll transferring lids that had been separated and stacked in TPR.

“We’re excited in regards to the first set up of the Mantis Robotic Trim Press Handler from NAS,” says Paul Phillips, BMG’s v.p. advertising.  “The system will assist thermoformers preserve their traces working regardless of the labor shortages they’re going through. The Mantis affords fast product changeovers and full product containment from the Trim Press to the bagger, all inside a compact footprint with minimal human interplay. We totally count on the Mantis to offer themoformers with extra uptime and dependable trim-press dealing with that grows with their enterprise.”

“Our robotic and shuttle station are fully reconfigurable. We’ve designed a system that may ‘dance round’ any current footprint.”

Gordert says the partnership with its beta buyer made sense as a result of this explicit thermoformer was dedicated to testing the TPR, its connection to the trim press (a non-BMG machine), and its skill to strip, rake and include the product all over the robotic device. The set up went “easily, with minimal points.” Huelsman says Mantis was up and working inside two to a few days and working across the clock inside 5 days. 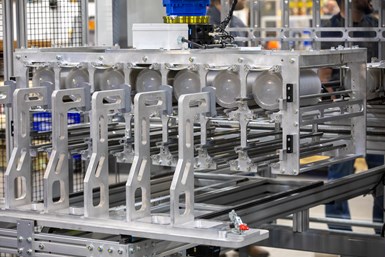 The BMG Group is made up of Brown, Lyle, GN, Freeman (a provider of thermoform tooling), NAS, and aXatronics. The latter is a licensed Motoman Robotics strategic accomplice that focuses on creating high-level mechatronics process-engineered options for difficult processes in manufacturing. NAS, a 25-yr-old firm, was acquired by BMG in 2016.